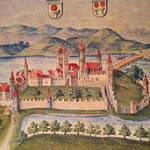 The town of Rapperswil, perched on the edge of Lake Zurich, dates their castle back to 1229. Count Rudolf II built the castle and fortifications, but the story of how the castle came to be is veiled in legend.

Let me start with what is not disputed: the Rudolfs had numerous land holdings in what is now Eastern and Central Switzerland. Count Rudolf II was in a village south of the modern day town of Winterthur, meeting with members of the Habsburg family (ancestors of the [to be in centuries to come] famous House of Habsburg) to discuss the purchase of horses. Their conversations continued well into the night, and most certainly involved large amounts of wine or mead.

Early the next morning, before sunrise and well before the town had woken up, Count Rudolf was startled awake by a clear bright light shining down from the night sky and through his bedside window. He was immediately gripped by a sense of fear and pending doom, and fled the inn in all haste. It was a cool Spring morning, and when he charged out the door and into early morning darkness he realized the light was hovering above and, apparently, tracking him. There was a shadowy object in the night sky, hundreds of meters above him, with a beam of light focused on his movements. Without giving it much thought, Count Rudolf II channeled his fear and sprinted away from the object and into the forest around the village.

The excitement was just beginning for the Count, however, as he quickly realized that the aerial object was following his movements through woods. Far above, between the tree branches, he could make out a shape moving in sync with him. In a panic, with sweat beading on his brow and his heart pounding in his chest, Count Rudolf resolved to put as much distance between him and the object in the sky as possible. He ran up ridges. He ran down through valleys. He scrambled, at times, when his feet started to fail him. Somehow, Count Rudolf knew that the airborne object with the laser light beam was not friendly — and so he ran for his life.

He ran through the morning, but the chase continued.

There were times when the Count thought he had escaped his pursuer; minutes would pass without any sign of the object in the sky or the piercing white light. Eventually, a cloud would shift to reveal the shadowy object . . . there seemed no escape for Count Rudolf.

Many hours later, with mud-stained clothing and overwhelming fatigue, a bruised and bloodied Count Rudolf emerged from what we now call the “Züri Oberland”. Through the forests and mountains, he had reached the shores of Lake Zürich. In the 13th Century, the location we know as Rapperswil was a tiny community of lakeside farmers — but to Count Rudolf it felt like redemption. It had been nearly an hour since he had last seen the floating object in the sky, and maybe — he thought — it was gone for ever.

Just as the Count was approaching the buildings of the little village by the lake, the airborne object zipped over him again and found him with the beam of light. Impossible at it seemed, Rudolf hadn’t escaped. Tears trailed down his face. He grabbed at stones along the lake and hurled them towards the object, but nothing could quite reach high enough. In an instant, a most unexpected thing happened. The gray object in the sky extinguished it’s light and plunged directly into the waters of Lake Zürich. With a dramatic splash, it was gone. 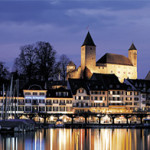 As the waves settled around the shore of the Lake, the local farmers came to check on the welfare of the Count. He looked terrible, having traversed difficult and wild country under the worst of conditions, and was muttering about creatures in the sky.

Count Rudolf rested for 3 days and nights along the Lake, paranoid that his pursuer would emerge from the Lake and resume the chase. But nothing rose from the water. Rudolf, weeks later, began construction on a fortress — it would become Rapperswil Castle — and vowed to fortify the location along the lake against the creature in the water. His subjects never knew what to make of his rationale, and even today his story is dismissed as nonsense, but the castle he constructed remains guard to this day. And as for what lurks in the lake, who can tell?

The CRUX (Count Rudolf Ultra eXtreme) winter ultra commemorates the legend of Count Rudolf’s wild flight through the Oberland. By retracing his route and with a finish line near his castle at Rapperswil (we finish just south in Schmerikon in 2011), we honor his endurance against so much adversity. We up the ante, a bit, by doing it in Switzerland’s mid-winter — but then again, we’re not doing it being chased by a tenacious airborne antagonist.

*This legend is based on the facts that Count Rudolf II built Rapperswil Castle, and lived in the Zurich region during the 13th century. The rest is inference based on no historical record what-so-ever.